Back to my roots, "El Barrio Escondido"

Gallista/Joe Lopez Studio in "El Barrio Escondido" is an even smaller studio than before. I’ll be concentrating on featuring and promoting my original oil and watercolor paintings from where I grew up and started my art career. I’m excited about coming back to the little house where I once lived. A visit to Gallista is by appointment only. Gallista products (Note cards, prints, and t-shirts) will still be available. 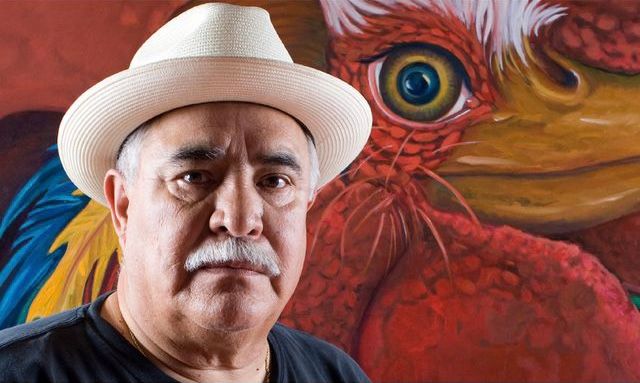 Since retiring as a gallery owner, the focus is now on promoting my art from my childhood home at 347 Everest Ave., in "El Barrio Escondido". The house belonged to my Tia Ysidra Jasso, whom my parents rented it. We eventually moved just down the street. Tia Ysidra, mi abuelita (grandmother) Porfiria, Tia Juana and my cousin Johnny Joe lived there for many years. My abuelita and my Tia's passed away. My primo Johnny Joe Jasso, also known as "El JJJ”, passed away on August 8, 2012. Johnny Joe left the house to my wife Frances and I, and I'm proud to be back home.

HISTORY OF THE GALLERY

Joe Lopez' first gallery opened in 1996. He says: "The main idea was to have a place where I could feature my own work, since I had difficulty showing work in any of the other galleries in town. Every First Friday all the studios in the area would open up and feature different artists, so I decided to start inviting my Chicano artist friends to exhibit as a featured guests. After a while, the word began to spread that I was promoting Chicano art, and I started getting approached by other Chicano artists. After 2 years on Alamo street, I was encouraged by a friend, Andy Benavidez, to join him on South Flores St, where he had bought and started One9Zero6 Gallery. My response was that he was crazy, and I would never be able to afford a building of that size. His response was, “The only thing they can say is no, what have you got to lose?”. One of my collectors opened the door for a bank loan, and as they say, the rest is history. The building was rundown, beat up, with even the ceiling was falling down. But with a lot of hard work, blood, sweat and tears, Gallista Gallery became a prominent venue for Chicano Art.